May 16th was the night of the Lotus Lantern Festival in Seoul so we planned our stay so that we would be in Seoul that night to enjoy it.  For sheer pageantry the events surrounding the Lotus Lantern Festival are probably unsurpassed in Korea.   A hundred thousand or more Buddhists from many countries come together to celebrate the coming of Buddha’s birthday by parading magnificent lanterns through the streets of Seoul.  (click images to enlarge) 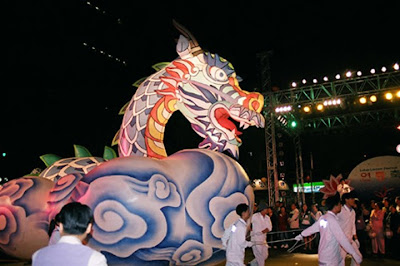 But we would not witness the 2010 Lotus Lantern Festival.  We were otherwise engaged in a more exciting experience.

On our recent trip to Korea, to participate in the Mungyeong Chassabal Festival we stayed a little longer to tour Gangjin, Jirisan, Gyeongju and Seoul.  Gangjin and Jirisan are rich in their tea and tea histories and I’ll eventually be posting some of what we found about tea and tea history on my Morning Crane Tea blog.  Instead, for my first post since returning home, I think I should begin with something very early.
It was in Jirisan that my friend Park Jong-Il introduced us to his tea teacher Kim Sung Tae.  Master Kim Sung Tae was leading a group of tea masters, potters and simply interested followers on an excursion that included making green and ddokcha teas the Chinese way.  Some of that experience will also eventually be found on my tea blog.  But more important, for this blog, Kim Sung Tae, is also a connoisseur of tea ware.  During his more than 300 visits to China in the last ten years he studied many of the ancient ways of making and preparing tea, and collected both Chinese tea and Chinese tea ware. In fact his knowledge and understanding of Chinese tea and Chinese tea ware is probably unsurpassed in Korea.  With more than 20,000 tea ware pieces, I can’t imagine any other collector (including major museums in Korea) that would have in their collection more (or a greater variety of) Chinese tea ware than Master Kim Sung Tae.  Who would have thought that we would find so much about Chinese tea in Korea?
For most of us in the Western world, when we think of teabowls, our minds think of Japan.  There are international exhibits where Western ceramic artists try to show how close they have come to expressing the qualities found in Japanese tea bowls.  In the process little thought is given to either China or Korea.  In reality, compared to China and Korea, Japan is a latecomer to tea and tea bowls.  Both China and Korea had teabowls, dawan or chawan hundreds of years before Japan and Japan owes much gratitude to both countries.  As I said in another post, one scholar said that removing Korea’s influence alone from Japan’s ceramics would be like removing all African Americans from the Jazz Hall of Fame.  If you also then removed China’s influence from Japan’s ceramics, very little if anything would be left.
There is an old saying, “Begin at the beginning.”  But who can really say what bowl the Chinese Emperor Shennong drank from in 2737 BCE when an errant tealeaf fell into his cup of hot water (or do you prefer another story of the beginning of tea). 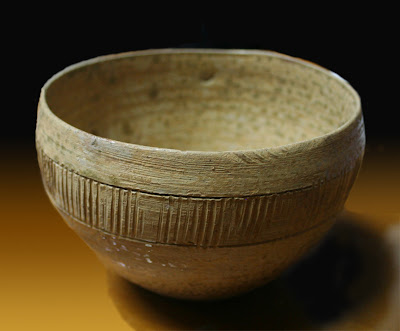 There was nothing errant about the glazing, decorating and firing of this Chinese tea bowl that reportedly dates as early as 150 BCE.  That puts this glazed bowl back to the early Western Han period (206 BCE-9 CE).
I knew that an applied ash glaze was used in China quite early but seeing this ash glazed bowl in person was a shock.  Frankly I have not studied Chinese tea ware much - as most of my efforts have been focused on Korea and Japan.  I knew that Korea’s Three  Kingdom Period (57 BCE – 618 CE) had kilns that would reach the melting temperature of ash but seeing this simple Chinese ash glazed bowl - that Master Kim Sung Tae swears was most likely made for tea - still alive - blows my mind.
By ‘alive’ I mean you can still feel the power of the potter in this piece.  The bowl is approximately 12 cm wide and 6 cm high; a perfect size for tea even today.  It fits the hand beautifully.  Obviously it was thrown on the wheel then decorated with a simple probably wooden rolling stamp that the potter in his haste inadvertently also touched to the rim of the bowl.  The clay for this bowl was not fully prepared.  A broken air pocket can be easily seen.  The ash glaze, most likely simply composed of ashes, was thinned with water then the bowl simply held and quickly dipped into the glaze.  The fingers, inside the bowl, left their mark forever. 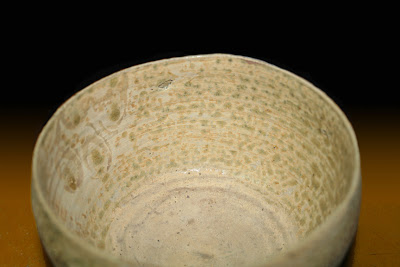 In my mind I sat with this potter watching as he turned the heavy wheel, pulling it toward him with his right hand so that the wheel turned clockwise.*(see below)
This bowl was one of many that day, each formed alone from individual pieces of clay.  (It would probably be years later when many similar bowls would be formed from a single mound of clay.)  The rolled decoration was applied immediately, probably with a wooden wheel stamp that was held loosely attached to the end of a stick in one of several ways and rolled around the bowl before it was trimmed and then lifted from the wheel.**  But on this day there were many bowls formed then set aside to stiffen (not dry) and glazed.
Grasped with two fingers on the inside, the bowl was quickly dipped in a simple thin glaze composed of ash and water.  As the freshly glazed bowl sat drying, at one point the potter picked the still wet bowl up again, moving it to make room for another bowl.  Thus four fingerprints are seen inside the bowl.
The practice of glazing stiff but not fully dry ware continues for common utilitarian ware in Asia today.  Bisque firing before glazing came much later when glazing practices became more sophisticated.
After sitting a few days to dry, the bowl was placed with many other items into a long slopping kiln and was fired with wood in a mostly oxidizing flame.  The slope helped the kiln to be very efficient as it reached nearly white heat – hot enough to melt the ash glaze.
More than 2000 years later this simple tea bowl is still 'alive' and possesses many of the natural “touched by the potter” characteristics greatly desired by chawan connoisseurs today.  But this tea bowl was not used for a “tea ceremony”.  It was used to drink tea as a medicine – and most likely not a medicine to cure illness but to prevent illnesses from occurring.  Tea was then, and is today, perfect for Chinese medicine that focuses on the prevention of health problems, as much as rehabilitation, and turns to tea and other herbs for this purpose.

*Koreans and Europeans would add a flywheel to their potter’s wheel that allowed them to be kicked with the right foot away from the potter or ‘counterclockwise’.  Both directions are ‘right handed’, actually one is right handed the other right footed but in any case we should not refer to either direction as ‘left handed’.  They are simply directions for working with the wheel spinning in the direction most often used in ones country.  In the case of Korea the direction changes often, sometimes even with the same potter, depending on the wheel and whether or not they want their strongest hand inside or outside the vessel.  In Korean onggi the wheel is pulled with the left foot in a counter clockwise direction.  This is an adaptation developed from an ancient hand building method.
**There are a couple of ways the wooden rolling stamp may have been applied while the pot was still on the wheel.  Both ways involve a wheel shaped wooden stamp with the decoration carved in (similar to treads on a tire).  The center of the wheel has a hole.  There are two methods, that I have seen used in Asia, used to hold the wheel.  The first is a simple stick with a nail on its end.  The wheel sits on the nail.  The second involves a "Y" shaped stick similar to a slingshot.   The rolling stamp is placed between the two prongs of the "Y" also held by a nail or wooden dowel.
Ask about our Korean ceramic workshops.