When I created this blog, my intent was to look at chawan by other artists but for some reason one of my chawan keeps popping up.  First it was a photo I found while cleaning, then it popped up on my computer seemingly out of nowhere.  I guess it is trying to get noticed.   You may or may not like it.  It really doesn’t fall into the wabi category.  In some ways it is too pretty – like a woman with a little too much makeup.  But never the less I’m attracted to it.  Also don’t get too excited if you do like it.  It sold about 5-6 years ago and I haven’t been able to get this effect again.  My clay body ingredients have changed and some of the glaze ingredients are also mined a little deeper in the mine.  That or something else is keeping me from repeating this glaze effect – so in keeping with my philosophy, I moved on, accepting the “the way of Tariki” or ‘outer forces’ (in Japanese).  I wish I knew the equivalent of that term in Korean.  There are other Korean philosophical positions that we’ll discuss some other time.
At one time I was able to get this effect on a lot of tea bowls.  This one in white is now in an important collection. 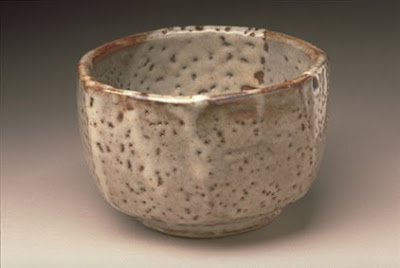 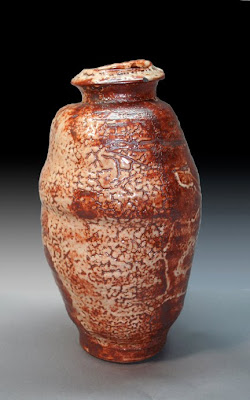 and on other forms in red. 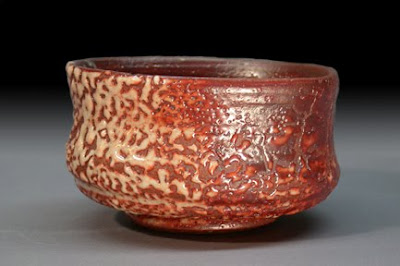 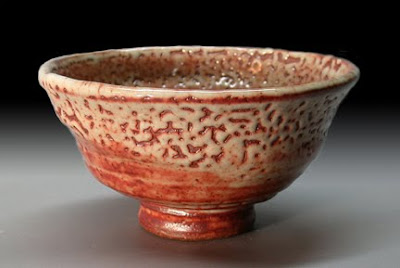 But this bowl in spite of its pretty look has a more Korean form and feel. 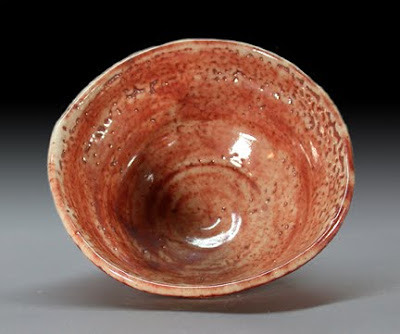 When one makes a lot of tea bowls many of them just seem to pass one like waves in the night.  I can recognize them as mine if I see them again but can’t remember them specifically or as being special.  Over the years there are a few that somehow stand out as being memorable. 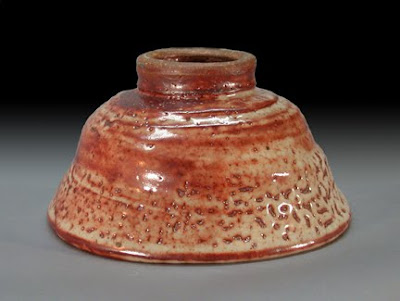 Memorable doesn’t necessarily mean they are really good but simply that for some reason they stick in my mind.  Such is the case with Red Shino T575.
There are many different kinds of shino colors - red, white, gray, black, rat etc.  There are also many shino glaze formulas, possibly hundreds or even thousands, slightly altered with more or less the same ingredients in varying amounts.  The feldspars change, the percentage of soda ash varies from a little to a lot, or a little red art clay or even tin is added.  Under various circumstances the results of the same glaze fired in the same way in the same kiln can give a variety of results.  With different clay bodies the variety is increased.  One might be firing wood or gas or possibly even electric (although I never personally fired shino in an electric kiln).  The heat source adds other dimensions.  The maturing temperature might be from cone 7 to 15.  Somewhere in there you should find a glaze result that you want to think about a little more.  As I said, for me one of those chawan is Red Shino T575. 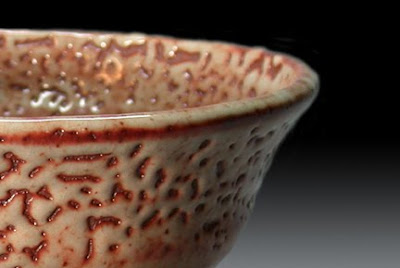 In addition to the obvious glaze effect, this bowl just seems to feel right in the hand.  It is relaxed and natural in form.  I think I have been looking at too many bowls by other potters that are a little tighter than mine. 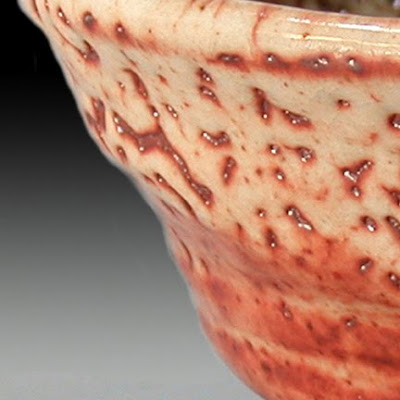 In recent years I have been going to Korea often and have been studying tea bowls by ‘the masters’.  Some of them throw with a little more precision than me.  I find myself getting a little tighter attempting to get some ‘classic’ results but in the process. I’m getting further and further away from me.
I just unloaded a kiln and threw away something like 30 of 40 bowls and I wasn’t excited about the remaining ten.  So I guess I’m saying to myself that after 50+ years of this I should get back to me and stop trying to please someone else’s chawan spirits.  Mine get a little angry or jealous when I do that and let’s me know it pretty quickly.
I still have a hard time making really predictable work using tried and true glazes that always come out the same.  I did that for a while when I worked in porcelain, but I like the mystery of ‘the Tariki’ and am most excited and pleased when my chawan spirits smile on me.
Of course this is no way to make a good living.  Many customers like predictability so that if they break one of your chawan they can come back and buy another one just like it.  But, for me, that is not a chawan.  It might be a bowl but it is not a chawan.  A chawan must have within it something stirring and a life that is a little different than others even its twin if one exists.
Have you noticed?  I’m having difficult time writing about or analyzing my own work – even when I share the work with ‘the Teriki’.
So this lopsided, loosely thrown ‘red’ will just have to wait until someone else takes an analytical crack at it.  It has done its job of getting me back to me.
Influence yourself.

PS: This bowl was purchased by a major collection in Korea. So it has a good home.
Posted by Cho Hak at 7:45 AM