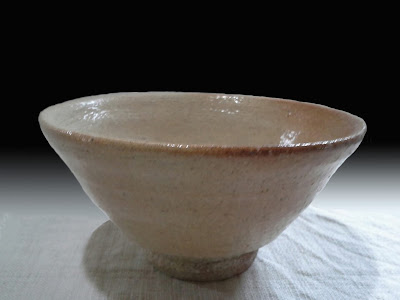 I’ve been away from this blog for far too long.  Because of that, I have been looking at a number of chawan worthy of being the one with which I returned and I have assembled several that I consider worthy candidates.  You will meet them later.  Then I received a grouping of images of chawan by Park Jong Il.  We introduced him to the Western tea world a few years ago and his teapots that are gaining international attention.  Park Jong Il is best known for his teapots. While his teapots are usually consistent and recognizable as uniquely his, his chawan are different.  In a real sense his chawan are like a group of people that might attend a gathering to celebrate tea.   Some are masculine, some are feminine, some are more rugged looking than others – I think you get the picture.
As I was preparing those chawan images for that post, I kept returning to this teabowl.  I wasn’t sure why I couldn’t get it out of my mind so I decided to write about it simply to figure that out.  Unfortunately I don’t have the bowl here and the images I do have were taken with a cell phone so I can’t hold it in my hands.  But, I do know it was made with Jerisan clay, the same clay that he used to build the walls of his home and studio - the same Jerisan that is the ‘holy mountain’ for Korean tea.  So this bowl at its heart is made with the clay that most ceramic artists think is the best clay for chawan.
Still, this is a very plain, effortless and not very complex bowl.  I mean this bowl appears so simple and uncomplicated that probably many people would simply walk on by.  Possibly not even give it a glance.  There are no drips, no stones emerging from the sides, no overlapping glaze or slip, no fingerprints, no wobbles – nothing – nothing that would call your attention to it.  Sure, there is that gentle kiss of flame on the lip - but that is it – after that nothing.  Really nothing?  Well, there is that perfect pale light orange ‘flesh’ color that is so sensuous and desired by tea connoisseurs.  And this bowl is very calm, unagitated and serene.  It is at peace with itself.  There is a softness to it that makes me want to hold it.  I know it would fit my hands beautifully. 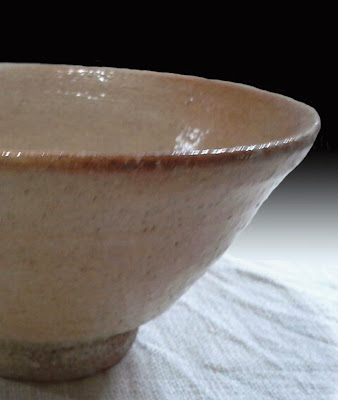 The walls were formed quickly with faint throwing lines – not fingertips, but the side of the finger.  The clay body has no ‘grog’ or pre-fired ‘dead clay’.  There appears to be a certain amount of fine sand but not river bottom sand that would act as ‘miniature ball bearings’ in the clay body. 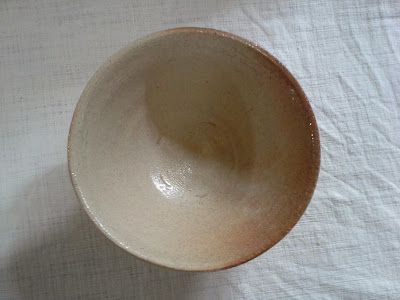 It is a deep bowl with the interior dropping down inside the foot.  The strong foot was trimmed quickly, possibly with a bamboo gub suay kal or left bent knife, leaving a ‘ruffled’ or chattered pattern where it didn’t cut cleanly through the sandy clay used to form it. 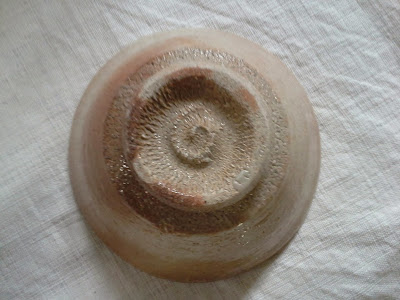 One or possibly two quick passes with the kal and it was done.  There is no sense in fussing over the foot for this bowl.  The foot is sturdy with a ‘bamboo knot’ foot – a classic finish.  Finally it was fired with wood with a semi-transparent feldspatic glaze – a time honored glaze.
So what makes this chawan extraordinary, exciting and compelling?  In a word, “nothing”.  Well, nothing ‘extraordinary’ or ‘exciting’, but compelling - I think so.
In a recent post on our new tea 無爲 Mu-wi Sejak I wrote a little about the term ‘mu’.  Essentially the term means something like ‘empty’, ‘nothing’, ‘nothingness’ or ‘without‘ etc.  At first glance, one might attribute all of these things to this seemingly unremarkable bowl.  But there was something about this bowl that made me come back to it again and again.  Just to absorb it.  I must also remember that the term 'mu' in this sense is a Taoist term so it it a Taoist 'nothing'.
I can imagine feeling this bowl as it fits my hands warm now, not hot, with the addition of some good fresh matcha.  The kind of matcha the Japanese keep for themselves and don’t export.  I bring the bowl to my lips and absorb that sweet, not bitter, freshness of tea.  This bowl is serving me well.  That is how it should be.  This bowl was made to serve.  It is not a collector’s chawan – not yet anyway, but give it a century or two of good use and it may become a cherished cultural treasure.  You won't have to wait that long to enjoy it and only a little while for it to begin to mature in use.
For this chawan is just that - a chawan.  It is not a bowl for candy or soup, possibly rice, but as soon as you look at it you know it is a chawan.   It is made for tea – to serve tea.  It is not made to serve itself, to be displayed on a shelf on some collector’s wall.  This bowl is made to be used, and the more you use it the better it will get.  It is just a simple chawan.  It is not the “Kizaemon Ido”.  But, let us remember that when Yanagi wrote about the Kizaemon Ido, he wrote . . . how ordinary! So simple, no more ordinary thing could be imagined. There is not a trace or ornament, not a trace of calculation. It is just a Korean food bowl, a bowl. Moreover, that a poor man would use everyday – commonest crockery.
Later Yanagi continues:
But that is how it should be. The plain and unagitated, the uncalculated, the harmless, the straightforward, the natural, the innocent, the humble, the modest: where does beauty lie if not in these qualities? The meek, the austere, the un-ornate – they are the natural characteristics that gain man’s affection and respect.
This chawan by Park Jong Il is not the Kizaemon Ido but it has many of those characteristics - plain, humble, straightforward and natural.  I don’t know about you but it has gained my affection and respect.