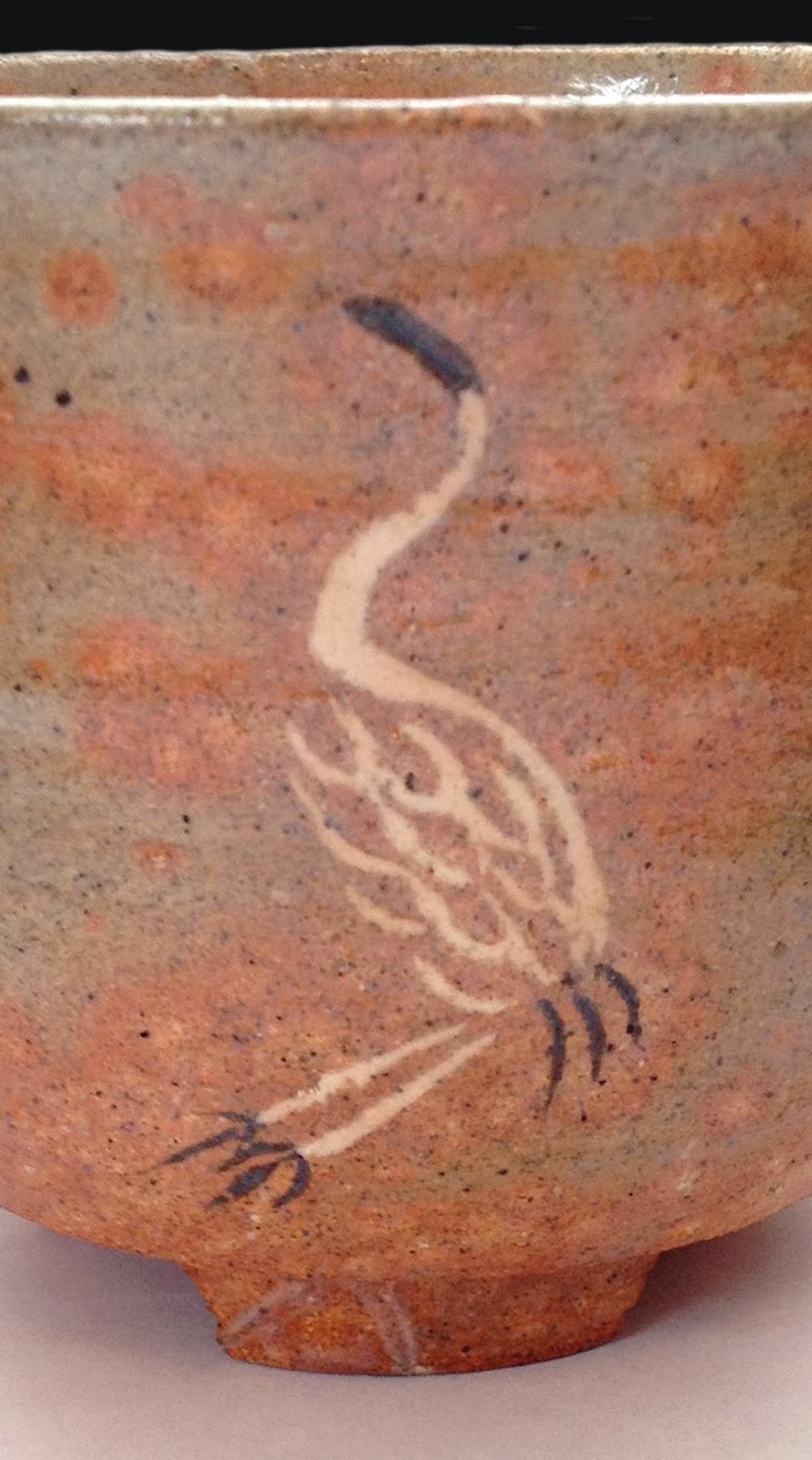 If you read this on January 28, 2017, The Korean Lunar New Year you will be reading it on Seollal:  so, Happy New Year!  The year of the Monkey will have passed and it is now the year of the Rooster. I wanted to post something special in celebration.  So I selected a crane.
You probably know that the zodiac animals, used as symbols for the Lunar, Han or Chinese New Year, does not include a crane.(1)  But the crane is one of the "mystical creatures" and symbolizes good fortune, happiness and long life or eternal youth.  So it is no wonder that the crane is an auspicious New Year’s symbol as it brings wishes for long life to those who believe.  Even if you don’t believe, why take chances when drinking from a bowl like this on New Year’s day is a great tradition - especially when drinking a delicious Korean tea. 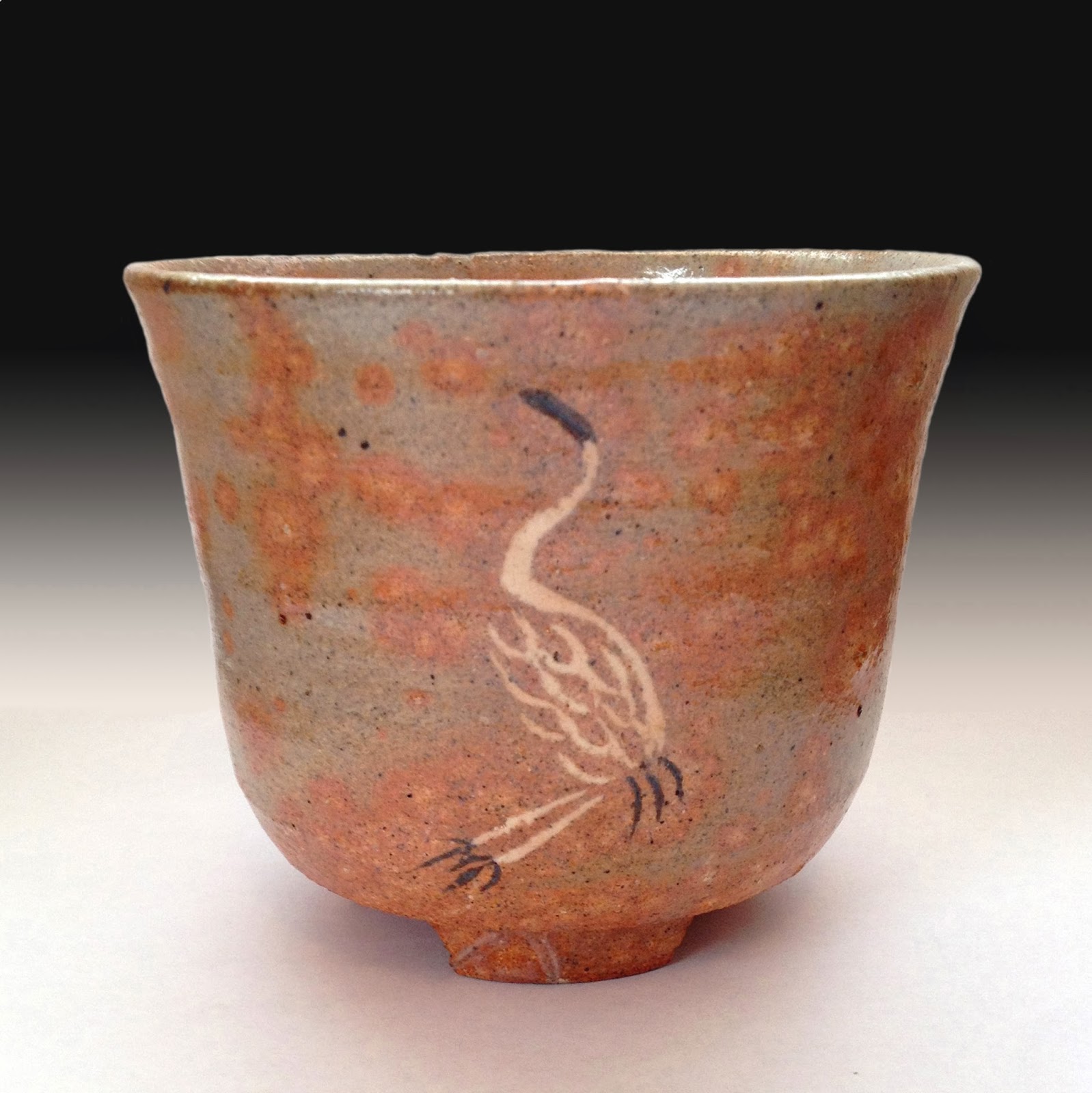 This is an Ip-hak Dawan, or standing (ip) crane (hak 학) chawan.  In many ways it is a New Year’s dawan.  In Korea the terms dawan and chawan are often interchangeable but the term dawan, for me, implies a ritual.  This style bowl is often sought out for a New Year’s ritual.
I spoke with several Korean ceramic artist friends about this bowl and got very little consensus except that it is a New Year's Bowl and a symbol for long life.  It is also often used throughout the year for special guests wishing them long life and good fortune.
Korea does have a special traditional ceremony and one of the days it is celebrated is New Years Day.  That ceremony is called Charae or Charye and is part of the fabric of Korean tradition.
Charae dates back to the first year of the reign of King Munmu.  In the year 661CE King Munmu of Silla (2) ordered tea to be used during ceremonial offerings.  That is one of the first mentions of tea in official records in Korea and predates tea ceremonies in either China or Japan.  To be fair that was and is an ancestral rites ceremony.  It continues today.  China was the first to have tea ceremonies as we know them today - celebrating tea.
Perhaps the use of this bowl is formal for one’s family or it may be informal  even casual when used for a special guest when they visit or simply by one person alone with ones thoughts, but in each case the purpose is the same - to bring long life and with it happiness and good fortune.  The drinking from a bowl for this purpose is then for me a ritual.  Koreans seek out images of the crane particularly as a symbol of long life, happiness and blessings from God and chawan, dawan and even chatchan or tea cups with this design are among the items they choose.
This particular ip-hak dawan is by my old friend Lee Jun Hee in whose studio I worked in Icheon, Korea now many years ago.  Lee Jun Hee was well known in his day for his beautiful paintings on white ware.  At the time I worked in his studio tea was beginning to be revised in Korea.  The Korean tea ceremony was being rediscovered.  Palace tea rituals were being saved and passed on and buyers of chawan were rediscovering Korean chawan. 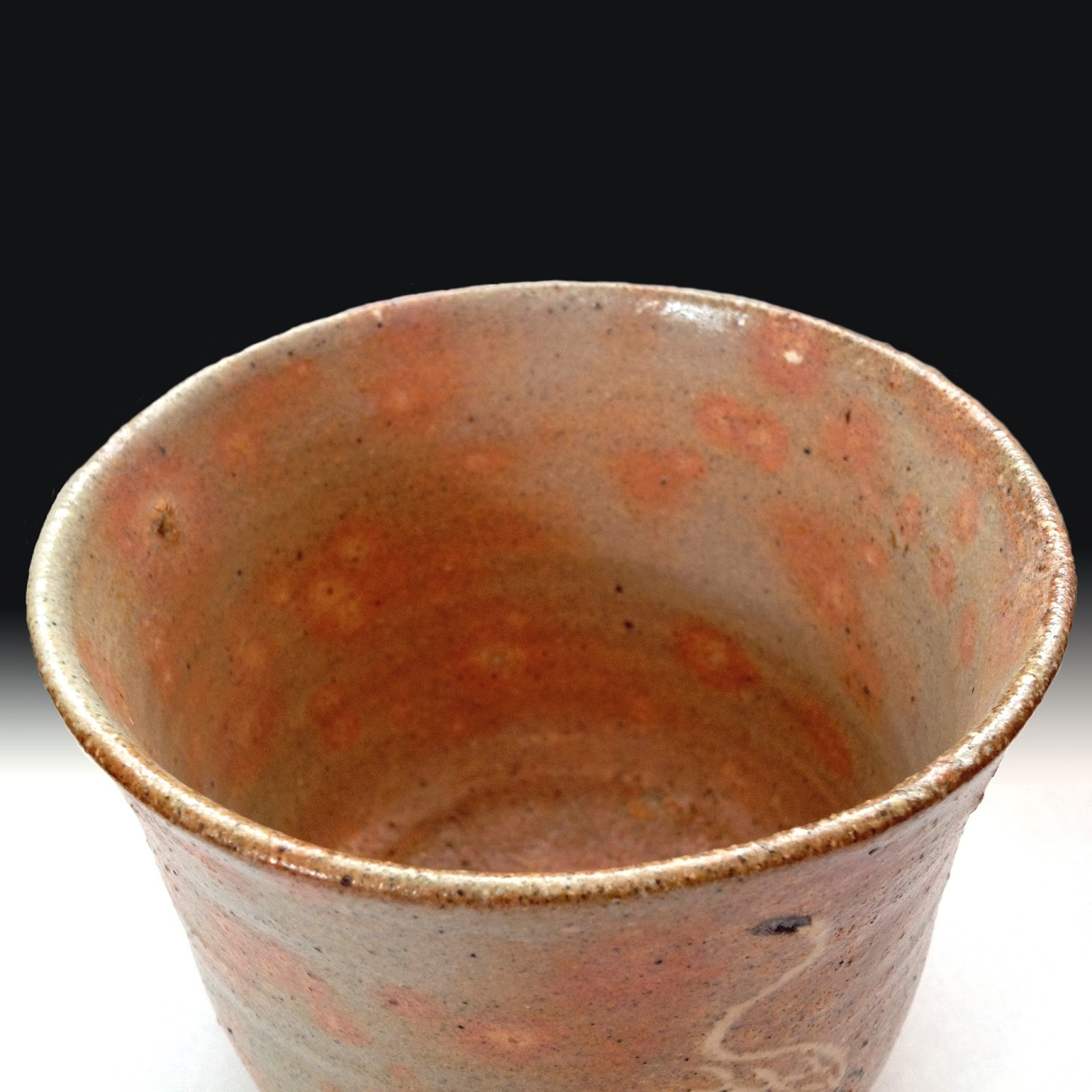 The bowl is tall and deep.  This chawan style, originally made in Korea, like the famous Ido chawan style, was adopted and used also in Japan as early as the time of Sen Rikyu.  I wonder if Sen Rikyu’s Korean grandfather had anything to do with the adoption of this chawan style?  Sen is the Korean name Rikyu adopted from his grandfather Sen-Ami an aesthete working for Ashikaga Yoshimasa a local warlord.
While the history and purpose the bowl is important, and for me quite interesting, it is time to examine the bowl. 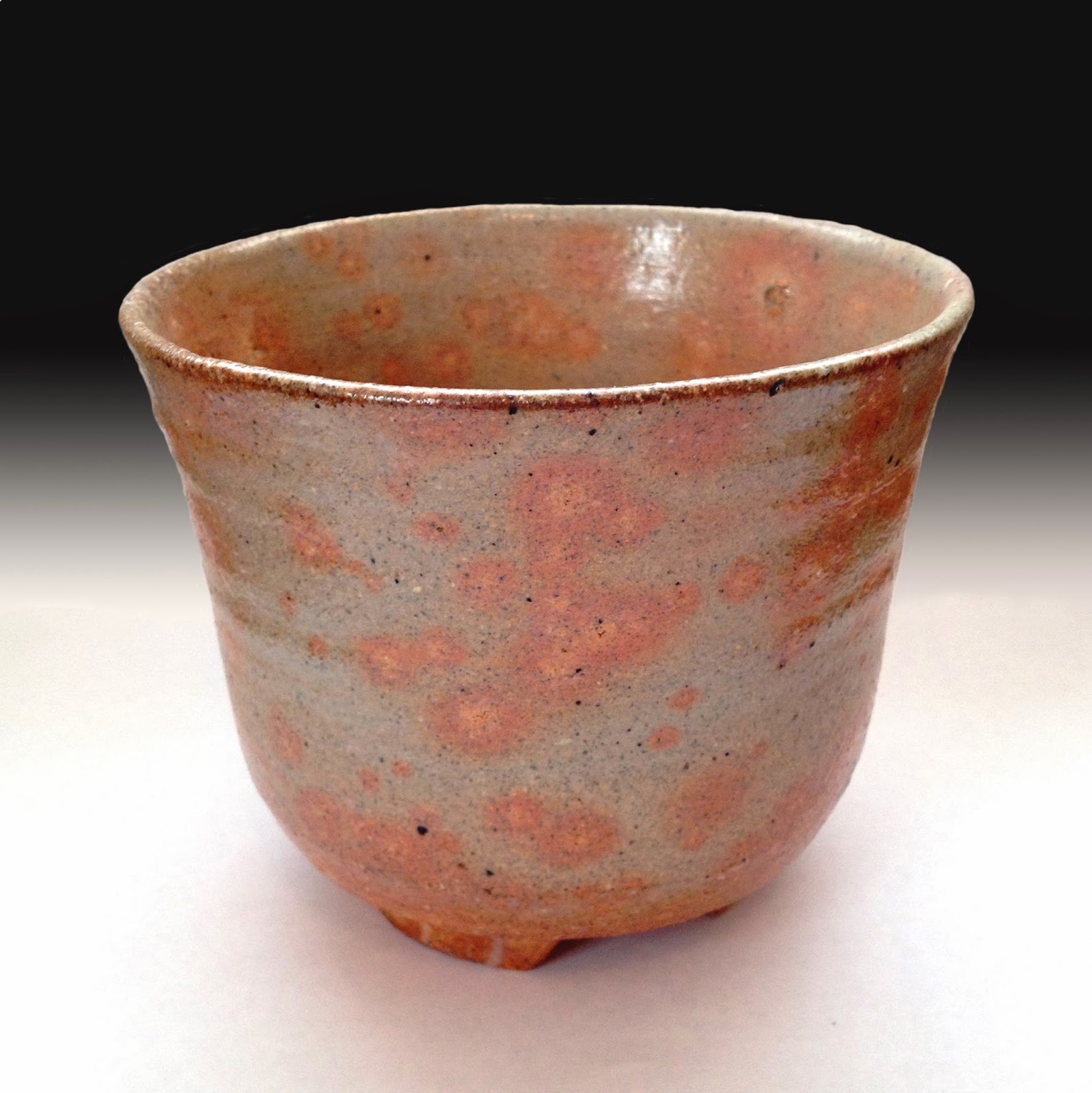 
Taller and more narrow than most chawan we think of as being Korean, this bowl was made for tea.  Being a dawan, it was made very carefully.  Its simple swelling to an open mouth form sits on a special three legged foot that obviously means there was something special about this bowl.  In forming the piece the ‘throwing’ lines are softened meaning a little extra care was taken.  The foot was not trimmed in the normal quick 2 or 3 quick swipes manner. But special care was taken in the trimming of this foot. 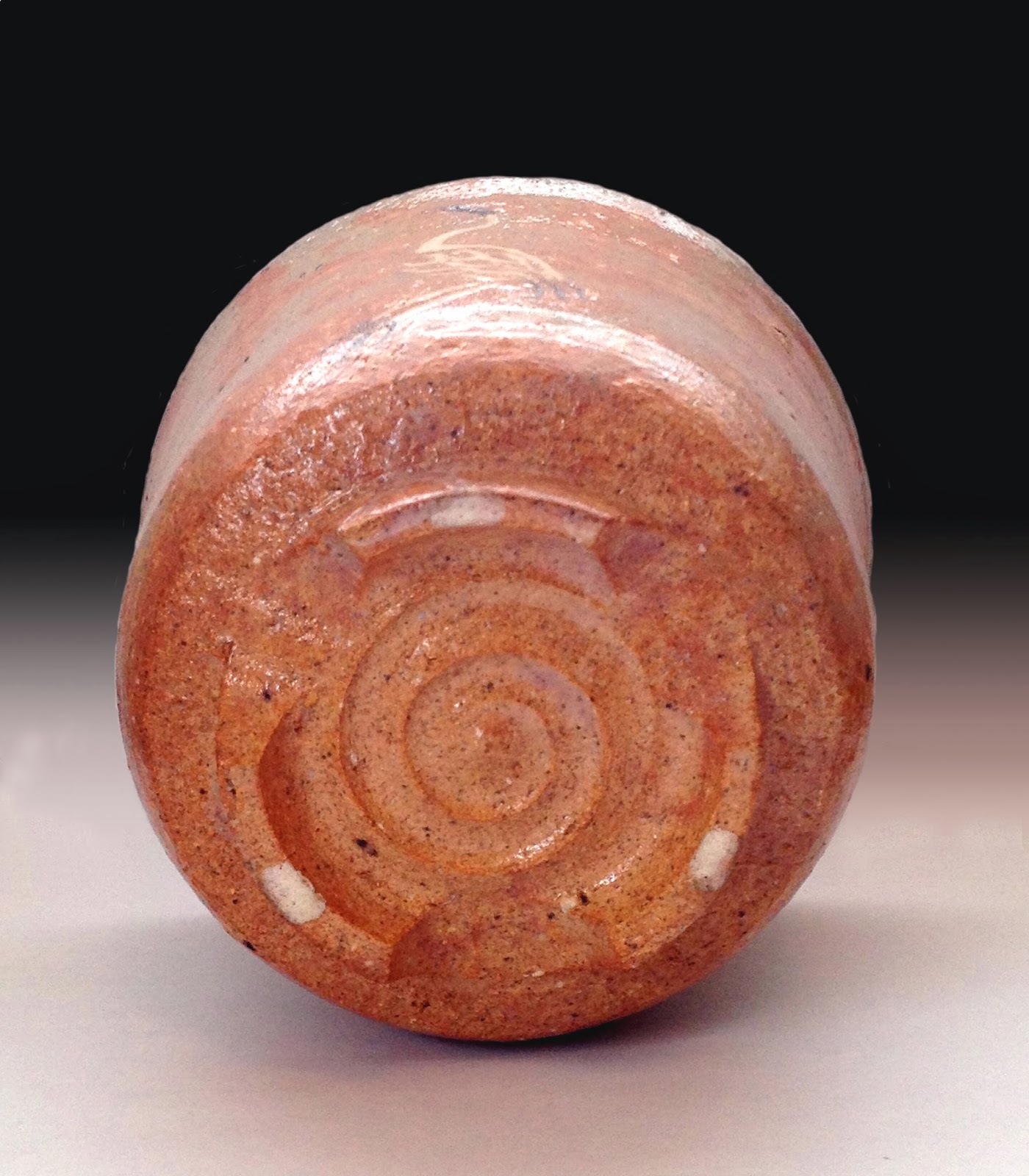 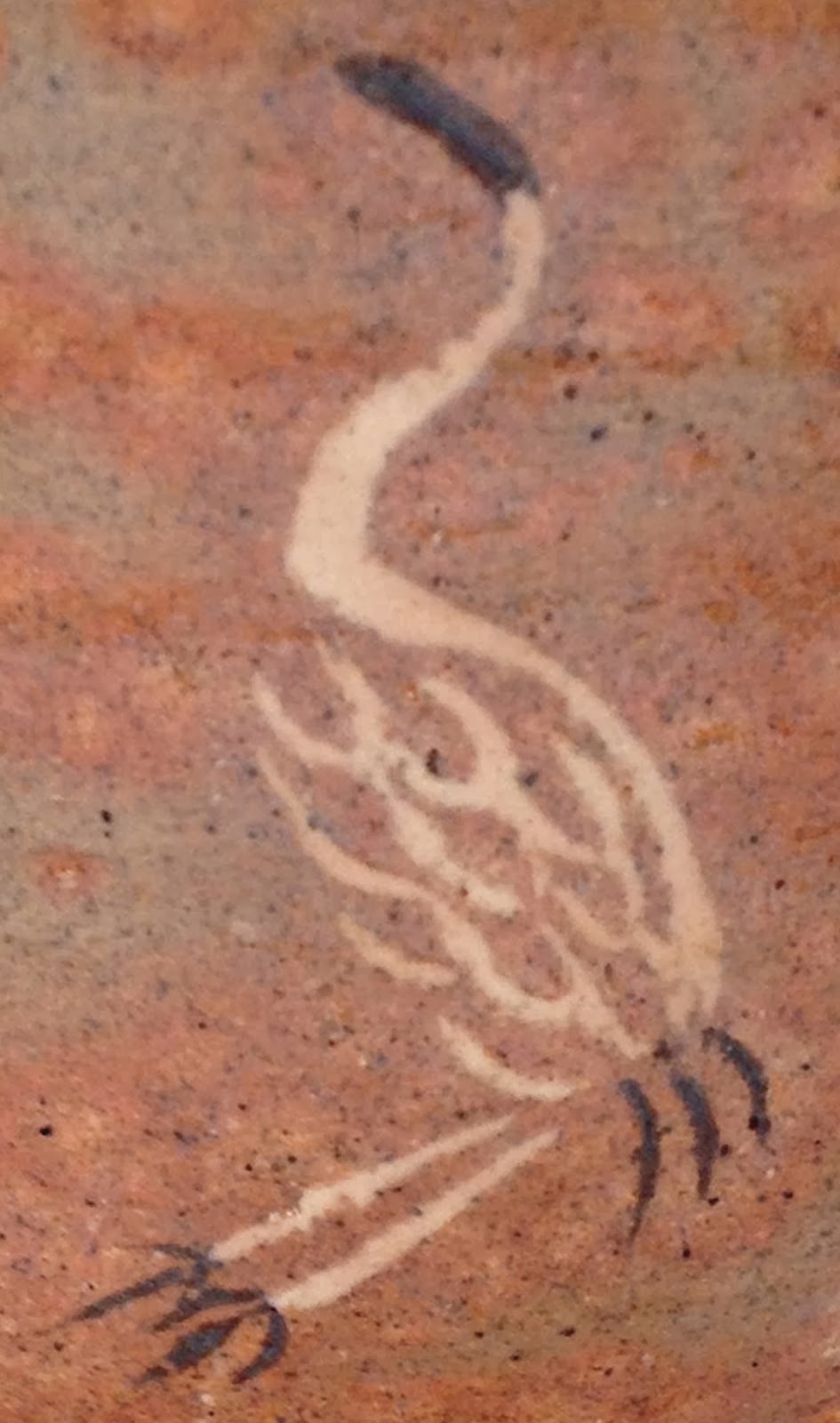 Then the crane was carved using a cho kak kal.  Cho kak kals are special tools each with various sharp tips now made of steel but originally from bamboo that are pulled toward the user to carve out lines of various widths that are then often inlaid with white and black slip. 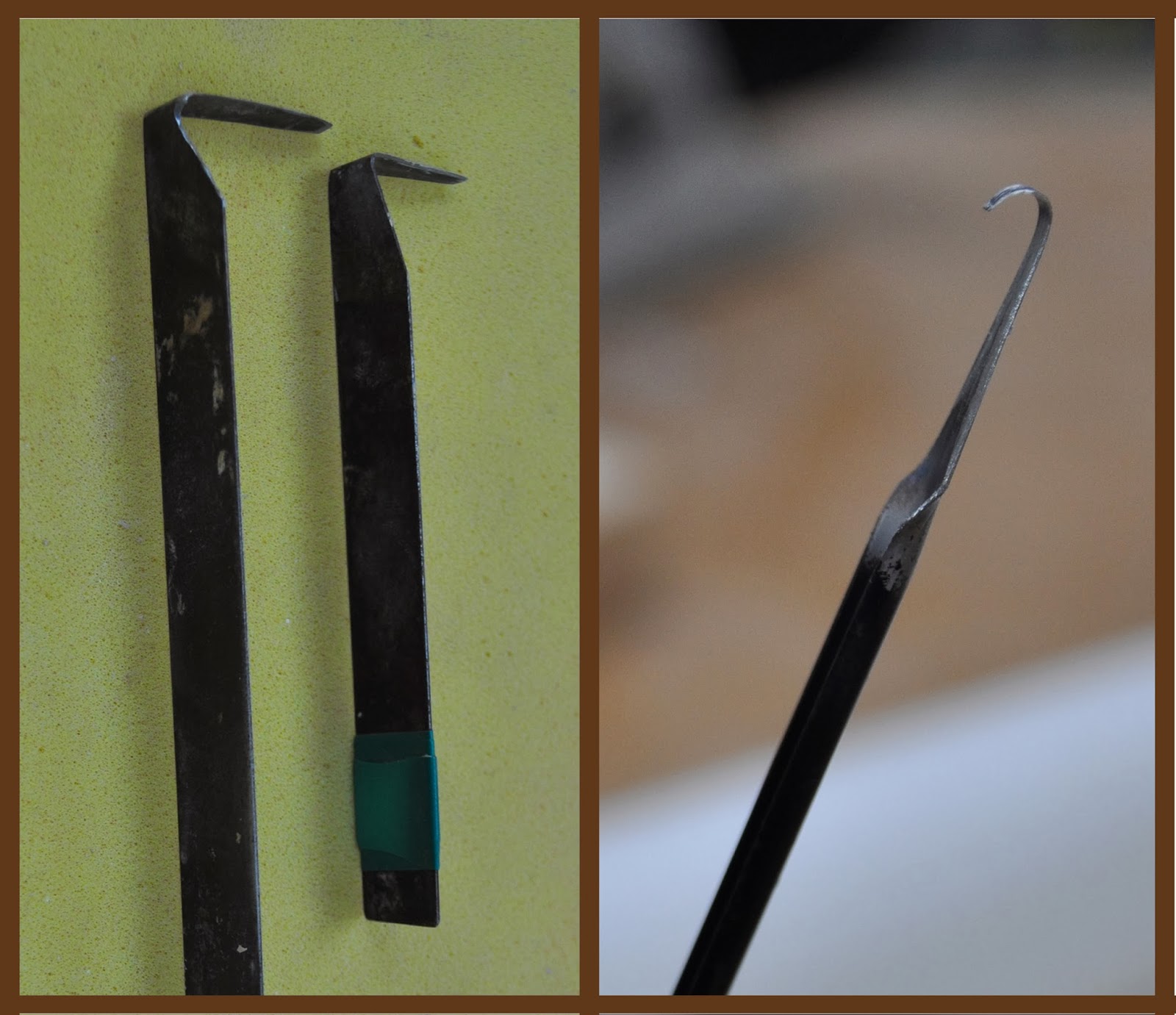 The extra slip is shaved away with a gub suay kal inlaying the slip.  A similar tool is used for trimming the foot.  Actually the ‘black slip is usually red (from the red iron oxide) or dark grey (from black iron oxide) when applied and turns black during the firing.  Of course the slip must ‘fit‘ the bowl and not shrink too much in the drying or firing process or the inlay will come out.  This particular process, the sanggam process, was invented by Koreans during the Goryeo Dynasty when both celadon and tea were at their height in Korea.  Now, in this form, it is one of several buncheong decorating processes many of which had their roots in Goryeo Dynasty's celadon decorating processes.  The correct term for this process on this piece is ‘buncheong sanggam’ because it is one of the buncheon processes, and it employs both white (peak sanggam) and black (heuk sanggam). 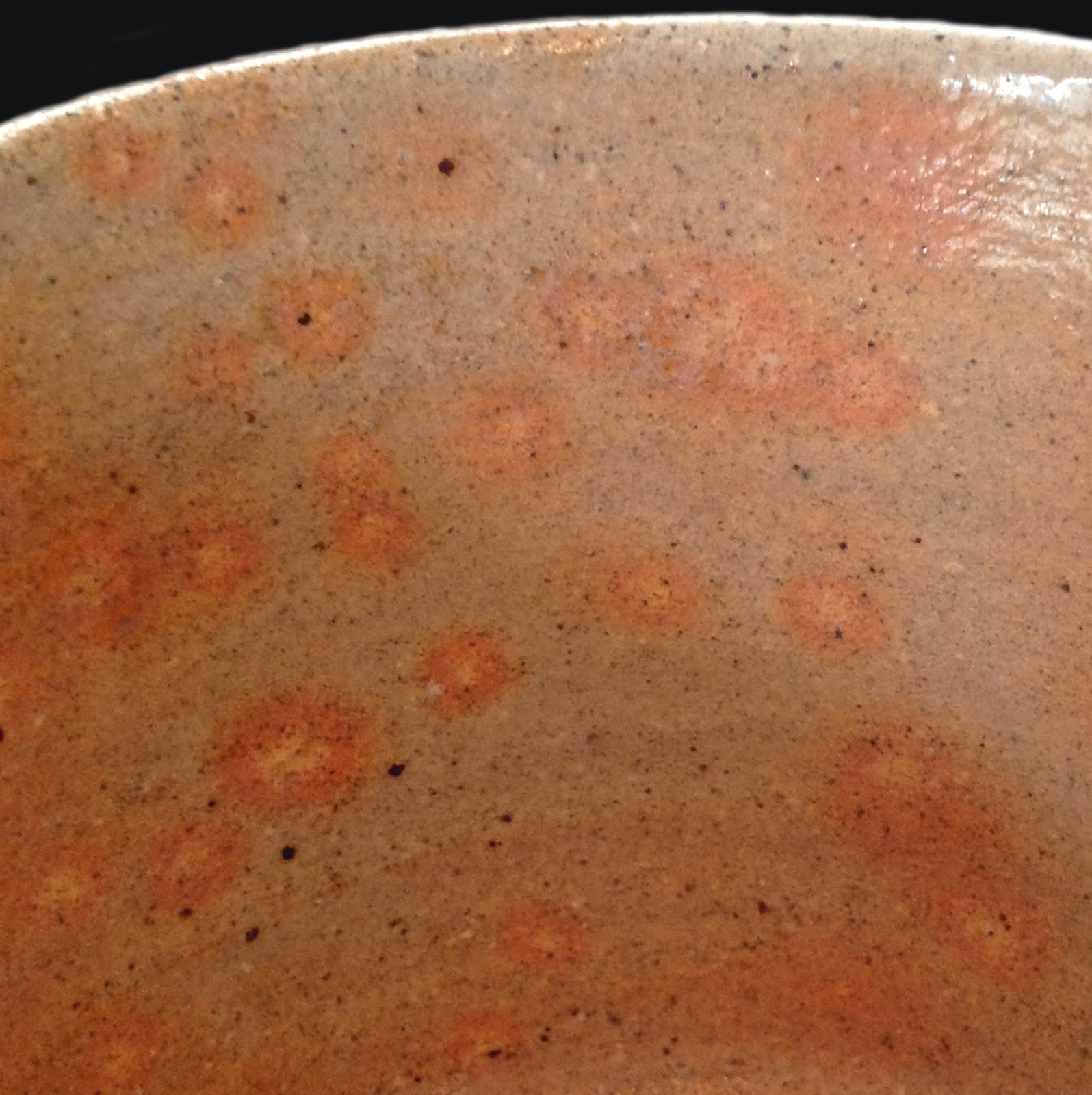 
It is glazed with a simple 'thin' feldspar and ash glaze over a toothy impure sandy clay body.  It was fired in a wood kiln using an alternating atmosphere between reduction (won) and oxidation (sanhwa) that captured re-oxidation spots that occurred around the impurities in the clay.  Note: I have noticed some tea blogs calling this effect 'buncheong'.  While the decorating process is a buncheon process, the natural reduction/oxidation effect is not limited to buncheon processes. Calling the effect "buncheon" is incorrect.  A buncheong process (and there are many) must use slip in some way.  This reduction/oxidation effect often occurs without slip as well as with the use of slip.

A slightly thicker ‘ring’ of glaze is found on the foot where the glaze 'gathered' around the finger tips when the potter picked it up by the foot to glazed the bowl.  Beyond that all is in ‘control‘ as suiting a dawan like this. In any case such "human touches" are prized on chawan.
For many reasons, this is one of my favorite bowls and I will have or will be using it January 28, 2017 while wishing long life and happiness to all.
May the spirit of the crane on this bowl bring you and yours long life, good fortune and happiness.
Again, Happy New Year!