The “Powdery” Matsudaira at the Hatakeyama 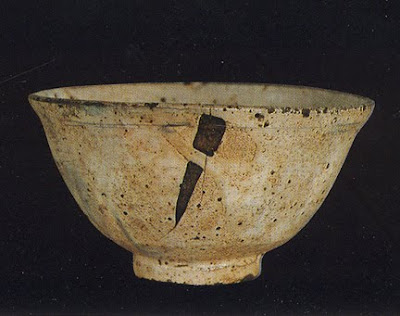 Many Tea ware experts and Tea connoisseurs consider the “Powdery” Matsudaira to be one of the most important chawan in the world.  A descendent or descendents of the old Matsudaira Japanese samurai clan own this bowl.  It is possible that it was passed down through that clan for generations.  The bowl is housed at the Hatakeyama Memorial Museum of Fine Art, a small, very serene and beautiful museum. The emphasis of the collection is on art relating to the tea ceremony and profound aesthetics of "tea taste".  Chinese, Korean and Japanese works are represented.  Designed entirely by the founder Issey Hatakeyama, the museum retains an atmosphere of traditional taste.  A simple tea ceremony room looks over a small garden where the beauty of the passing seasons can be appreciated.
To many Tea ware artist and connoisseurs, the “Powdery” Matsudaira, like the Kizaemon, embodies the ‘essence of tea’.  From the moment it was formed on a humble wheel, to the quick dipping into slip ‘tum bung’ that left an accidental bare mark revealing the clay body - in a “tealeaf-like” pattern, to the accidental drip across that mark made when the potter lifted the bowl to keep the excess slip on the bowl, this was destined to be a great bowl.  Tiny specks of natural stone peeked through the slip at the peak of the firing.  This slip, like that on many old tum bung buncheong pieces, was more than strictly a “slip”.  It was a slip glaze fusing slightly and sealing the body.  More than likely it was also ‘single fired’, without the benefit of bisque firing.  This chawan is beautiful, capturing many moments of the forming, ‘glazing’ and firing process.  The inner and outer powers have become one in this amazing chawan.
But, was this bowl as “accidental” as I suggest?  Many article have been written about this bowl in both Japanese and Korean.  Some of those articles discuss the tea ware master who, with careful dipping, placed a tealeaf pattern on the side of the bowl.  They wonder how such a man conceived of this plan and marvel at his foresight and skill.  Are they correct?  Was this bowl preconceived?
Each person may look at the same object but perceive it differently. I remember visiting a major North American museum some years ago.  I was in the Egyptian section and was admiring a small pre-dynastic (probably Badarian Period) stone or stick polished ceramic jar that was red on the bottom and black on the top.  The label explained that the two-color effect was a result of firing the pot twice.  I have read the same thing in art history books.  But from a potter’s perspective they are wrong.  The work was simply fired upside down in a ‘pit” type firing.  The black is a result of deep ashes caused by the burning of large amounts of small twigs and hay like material used in the firing.  The ashes covered the lowest portion of the piece causing reduction and carbon to penetrate the clay while the top (actually the bottom of the finished piece) became re-oxidized and remained red.  The author, who was probably an archeologist or museum curator, wrote that it took two firings from their own perspective.  They were not a potter and perceived it differently.  Were they wrong?  We can’t be certain, as we were not there, but it is not logical that a ceramic piece made around 4500 BCE by humble common people who just wanted to make a jar – not a work of art – would go to the trouble and long labor of firing it twice.
In a like manner, it is not logical that a humble, poor potter making several hundred rice bowls a day would take the time from their routine and select a bowl then dip it so carefully as to create a “tealeaf-like” pattern on the side.  From my perspective the bowl is more beautiful because they did not do that.  This bowl, now the “Powdery” Matsudaira, was the result of approaching one’s work with mot shim no mind.  He worked with a mind devoid of contrivances or interruptions to the flow of the work.
That is the problem with my tea ware work, with many tea ware artist’s work.  It is nearly impossible to approach it with mot sim.  We read too much – even write too much (as I am probably doing now) and it gets in our heads and mulls around and we try to come up with techniques and contrivances that will give our chawan the right look.  So I remain, unabashedly searching for a natural way of being with myself and with clay in the hope that Tea ware not just tea ware will happen on my watch.

It has been said that the highest form of flattery is imitation.  If this is true then the “Powdery” Matsudaira has probably received more flattery than any other chawan.  Large numbers of Korean and Japanese tea ware artists make their version of this chawan – each searching for the right look.  It happens so often that it is easy to find examples of it in many exhibit catalogues on tea ware.  Not only do they make copies of the “Powdery” Matsudaira but select their copy of it as the example of their work that they want to print in the catalogue.
Are they wrong to make this imitative work?  My first and quickest answer is, “Yes.  One should never imitate if one is an artist.”  But the old potters who created the tea bowls that were adopted by the Japanese and elevated to the status of chawan were not ‘artists’.  At best they were jangin masters, and their work was ‘folk art’ if art at all - but not an ‘artist’.  Many of them would say, as one told me, ”Creativity is illusive.”  There is not the pretense of being a Tea ware ‘artist’.  “I am just a potter.”  They tell me.  In the West we have developed an unwarranted aversion to those who ‘make things’ the non-artists.  We artists look down on them and point to the innovative creative work we produce in comparison.  But at the same time we admire Yanagi’s mingae movement in Japan and rush to learn origami.  Mingae is folk art and pottery is part of that movement.  It was also originally inspired by Korean folk art collected and admired by Soetsu Yanagi since he was a boy.  So, in my opinion we should not rush to judge.  If a potter’s version of the “Powdery” Matsudaira is a ‘sure seller’, why not make it?  After all, there is no illusion by these potters that they will go down in history as some wonderful super potter without whom the world of pottery would crumble.  They simply want to make work, and hope that someone likes it well enough to buy it.  Hamada Shoji once told us that the reason he became a potter, as opposed to a painter, was because even his bad work would sell.  What an astonishing comment.
I can’t leave this posting without showing some versions of the “Powdery” Matsudaira.  Don’t be so quick to judge.  Also don’t compare these with the beautiful aged and often used Matsudaira or with each other.  They are not the same object and must be viewed with ‘new eyes’.